Boeing - IIT National Aeromodelling Competition for college students in India is sponsored by Boeing, and conducted in collaboration with IIT Bombay, IIT Delhi, IIT Kanpur, IIT Kharagpur and IIT Madras. Logistics support for this event is provided by Skyfi Labs.

The competition is launched with the vision to provide a unified national platform for students interested in aerospace and related engineering disciplines - to demonstrate their aero-modeling expertise.

This is a two-staged pan India Competition:

Evaluation will be carried out in two rounds for the Zonals; a qualifier round and a main round. The evaluation criteria and the constraints are listed in the problem statement. Teams qualifying to the main round in the zonals will be reimbursed a limited amount of Rs 5000 per team for the costs incurred towards the expenses for procuring materials for their models.

The competition criteria for the Finals will be declared soon.

A team must design, fabricate and demonstrate a fixed wing aircraft system that can perform tasks mentioned in following rounds with given constraints.

Format of the Competition

The zonal events will be conducted in 4 IITs (East Zone: IIT Kharagpur, West Zone – IIT Bombay, North Zone – IIT Kanpur and South Zone – IIT Madras).
Participants can register at any of the four zonal competitions and bring their aircraft and all necessary equipment to participate.
Top 3 teams from each zonal round will be invited to the finals at IIT Delhi.

Theme: The theme for the zonal rounds this time is Payload Carrying Capability.
The arena will be an open ground. There will be two rounds in the competition

The aim of the qualifier round is to select top 30 teams to the Main Round.
Since the theme is payload capability, the qualifier round’s objective is to select those teams who built aircraft with good payload carrying capability and can fly safely while carrying the payloads.
The aircraft should carry one or more than one payloads (golf balls of weight - 45g, diameter -43mm - will be supplied by the organizers during the competition) as they can and fly for a minimum time of 30 seconds. The aircraft should then land with the entire payload in it - Payload should not come out of the aircraft until touchdown.
The payload should be mounted inside the aircraft and should not be exposed externally. Judges will examine the aircraft and will allow take-off only when they are satisfied with the payload mounting mechanism.

Score: Weight of Payload Carried*100/ Weight of Aircraft without Payload

Those aircraft which will not be able to fly for 30 seconds with the payload will get a 0 score.
A maximum time of 2 minutes will be given between the take off and the landing and the aircraft should complete the round within the time limit.
Top 30 teams, based on the score, will qualify to Main Round from the Qualifier Round. Along with qualification to next round, qualifying teams will get a reimbursement of INR 5000 per team towards material costs for their models.

The aircraft should carry one or more than one payloads (golf balls of weight - 45g, diameter -43mm - will be supplied by the organizers during the competition) and drop them in a circular drop zone of 20m diameter.

The drop zone is at 40m from the take-off and landing zone. (For a better understanding of the arena, refer to the illustrations on the right).

Score: Weight of Payload Dropped in the zone*100 / Weight of Aircraft without Payload

A maximum time of 3 minutes will be given between the take off and the landing and the aircraft should complete the drop and land within the time limit.

Teams with highest final score will be declared as winners.
If there is a tie, winner will be decided by a separate round framed by the Judges on the spot. Judges' decisions would be considered final in all cases.
Top 3 teams will be invited to IIT Delhi for the finals. The problem statement for the final round will be launched in March 2020.

Final Round
Nodal IIT: IIT Delhi
Dates: Will be announced 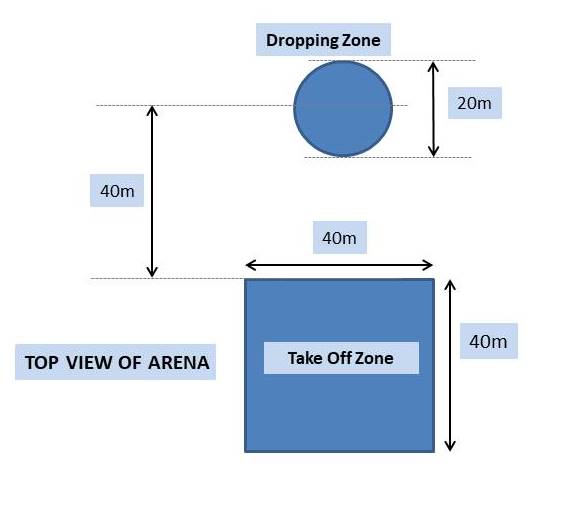