How to make an Augmented Reality App? Step by Step guide for beginners 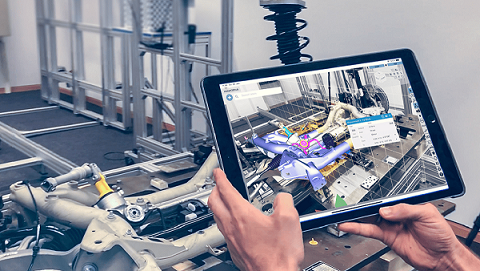 In the last few years, the way we perceive the world has undergone massive changes. Thanks to the development of technology, we are now transforming the way people interact and share experiences. The newest disruptor in this field has been the arrival of VR and AR. Augmented reality apps and virtual reality software help us have experiences in a way like never before. Studies report that the augmented reality app market will hit a valuation of around $70 billion to $75 billion by 2023. Therefore, as a young computer science graduate, this is one area that you need to focus on. So, what is the best way to gain expertise in the field of AR? The best way to do so is to build your own augmented reality apps and projects. Therefore, here’s a look at how to build an AR app, and why you should give it a shot!

What is Augmented reality?

Augmented reality is what you get when you use technology to superimpose information onto real life. The information may be in the form of images, audio files, or even videos. These bits of data are interwoven into the fabric of our reality, to create a hybrid or augmented reality. Many people use the words virtual reality and augmented reality interchangeably. However, this is a misconception as they are both different from each other. While VR refers to computer-generated and rendered environments that immerse us, AR builds these components into our real-world. Rather than create a new world from scratch, it just superimposes certain elements into our reality.

While augmented reality is regarded to be a futuristic technology, it has been around for a couple of years now. For instance, heads-up displays in fighter aircraft, which showed information regarding altitude, speed, and so on, all used the same concepts. In 2009, MIT’s Fluid Interfaces Group created SixthSense, which brought together a camera, projector, phone, and mirror to manipulate images. A few years later, in 2013, Google came out with its Glass, which made augmented reality apps work on wearable interfaces. The Glass could respond to commands, overlay images, and even sounds.

Vito Technology created an app called Star Walk, which allows users to look at stars in the sky and see what planets and stars are near them in real-time. Similarly, Layar uses the inbuilt GPS to gain information about a user’s surroundings and then give them information about stores nearby. Disney Research’s AR-based colouring book allows you to create 3D characters out of the things you have coloured in.

However, the most popular example of an AR app has been the phenomenon that is Pokemon Go, which came out in 2016. With over 100 million users worldwide, it became a global sensation that generated over $2 billion in revenue. The app allowed users to turn into trainers like Ash, who travelled around town to capture their own pokemon. Another popular AR game was 2018’s Wizards unite which allowed users to wander around Hogwarts and live the life of a witch or wizard. The game was an instant hit amongst Potterheads with over 10 million downloads.

The future of AR does not have to revolve around entertainment and gaming alone. In fact, it can help us visualise just about anything, which makes it a valuable tool for gathering and presenting the information. As you read this article, top scientists from all around the world are working towards including AR technology into contact lenses, to make movies like Minority Report and Mission Impossible, a reality!

The massive popularity of smart glasses and wearable tech is another avenue that AR will definitely be able to leverage. Therefore, this is a very viable field that has a lot of potential for growth and expansion. Hence, as a young graduate, it would be very beneficial if you could gain some expertise in this new and exciting field. So, just how can you do that?

How to Choose the Right Augmented Reality SDKs?

Here are the main factors you need to consider while choosing an AR SDK:

1. Cost: In case you are a beginner just starting out, go for open-source AR SDKs, which provide support, have an active community supporting it, and are free. As you grow and develop, you can switch to paid SDKs, which offer a lot more extensions depending on the applicant’s needs.

2. Platforms: While there are a lot of choices if you want an app compatible with iOS or Android, you might find fewer options for other OSs. When it comes to Windows and macOS, your options might be limited, so when starting out, try to opt for platforms that have more variety.

3. Type: Do you want an app that works through image recognition or via GPS? You need to choose what type of app you want to build before deciding on the right toolkit for it. If you want something that works via image processing, you will need to combine machine vision and artificial intelligence. Meanwhile, if you want a location tracker, you will have to employ GPS and other compass characteristics and information.

4. Unity Compatibility: As Unity is the most popular game engine in the world, make sure whatever you create has Unity support. Whether you want to build an app or an AR game, you can use Unity to build applications.

5. Storage: Decide on whether you want cloud storage or local support. Usually, the decision depends on the number of markers required. The more markers you need, the more data you will require, and hence more storage. For such applications, cloud storage is the way to go.

What software is used for Augmented reality?

How to create an augmented reality app?

Following are some online Augmented Reality online courses that help you to master this innovative piece of technology:

This augmented reality app development tutorial will help you with the basics of Augmented Reality. You will gain hands-on experience by working with industry-standard tools, such as Unity and Vuforia. Students will learn about the concepts of AR and how it is implemented in Game Development. Finally, they will build projects like Smart Business Card, Vuforia Cloud Recognition app, and a simple game.

Ever since the AR game Pokemon Go took the world by a storm, gaming companies are eager to use AR in their apps. Through this augmented reality app development tutorial, students will learn about how they can accomplish this. Students will learn about what sets AR apart from other technologies and how to leverage it to create powerful games. They will also learn about Dynamic Mapping, Pose Estimation, and Smart Terrain creation for games.

Explore more about this course

The video game industry will be worth $300 billion by 2025, thanks to the support of over 2.5 billion gamers around the globe. This augmented reality app development tutorial will help students understand how AR can help with this growth. In this project, students will work with Unity to create various game components. They will also learn to build scenes and create different levels. Students will learn more about C#, Game development, and finally, upload their game on Facebook and Playstore.

Discover more about this course

Use these augmented reality app development tutorials to get ahead of the curve and leverage this new technology that has the power to change the world. Make sure you are unique and valuable when you graduate by improving your skills in fields such as AR, and VR, which will have a lot of potential in the future. In case you have any queries, do let us know in the comments below.

How to make an Augmented Reality App? Step by Step guide for beginners