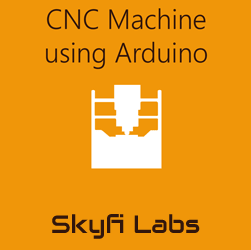 What is this course about?

CNC stands for Computerized Numerical Control. CNC Machining is about automating the machine tool operations for more precision and ease in manufacturing. In this project you will build a fully functional 3 axis CNC machine using Arduino which can perform manufacturing operations like drilling, milling and cutting. The tool will be operated with the help of G Codes and Arduino interfacing.

By building this project, you will practically understand about CNC machining and work with stepper motors, Arduino board, G Codes, CNC calibration and programming.

Anybody interested in Manufacturing and CNC Machinning can attend this course.

Bangalore, now known officially as Bengaluru , is the capital of the Indian state of Karnataka.

Bangalore, now known officially as Bengaluru , is the capital of the Indian state of Karnataka.

Once called the "Garden City of India" and the "Pensioner's Paradise", these epithets no longer apply to Bangalore, which is today a large, cosmopolitan city with diminishing green spaces and a large working population. Bangalore is the major centre of India's IT industry popularly known as the "Silicon Valley of India".

The earliest records of a place named "Bengaluru" are found in a ninth-century temple in an area that is now known as "Old Bangalore".

Legend has it that when the feudal lord Kempe Gowda was once hunting rabbits in this area, a rabbit turned and attacked his dog. This made a great impression on Gowda and he gave the place a title of gandu bhoomi (the place of heroes) and in 1537, with the assistance of the local king, he constructed three districts protected by a walled fort on the site.

During the next three centuries, Bangalore existed very much in the shadow of its neighbouring city Mysore, and control of the town changed hands many times. The year 1831 marked a major turning point for the city. Claiming misrule by the king Krishna Raja Wodeyar III, the British took control of the Mysore Kingdom and, possibly influenced by the city's salubrious climate, moved the administrative capital to Bangalore. New telecommunication systems were laid, rail connections built, fine government buildings constructed, and the city's famous parks and gardens established. After independence, Bangalore maintained its position as the state capital of Karnataka. The city continues to flourish today.

For many years, Bangalore was known throughout India as the most green, liberal and forward-thinking city. In recent years, these attributes have propelled Bangalore to the forefront of the high-tech industry boom in India, and it currently ranks as India's most developed city and one of the world's fastest growing urban areas.

The name Bangalore appears to come from an Anglicisation of the native name Bengaluru – an adaptation of the earlier name in Kannada, Benda Kaalu Uru (Town of Boiled Beans). Apparently, this rather humble name was bequeathed to the city by King Vira Ballala. Once while lost in the area, he was offered boiled beans by an old woman, and it was out of gratitude that he named the area after this simple offering.

Unlike other parts of India which are extremely hot in the summer months, Bangalore enjoys a relatively mild climate all year round.

Being the capital of Karnataka, the official language in Bengaluru is Kannada. However, many people are also able to speak and understand Hindi and English. Other Indian languages such as Hindi, Malayalam, Tamil, Telugu and Urdu are also spoken by the respective migrant communities. As Bengaluru is a cultural hub, it also has a smattering of Konkani, Marathi and Tulu speakers.

Most auto rickshaw drivers, bus conductors and shop assistants can converse in at least basic English. Signs are generally written in both Kannada and English. However, a basic knowledge of Kannada comes very handy when interacting with domestic helpers and roadside vendors.

The airport, open since May 2008, is among India's busiest and most modern. The airport is host to 10 domestic airlines and 21 international airlines connecting the city to about 50 destinations across India and the rest of the world. The airport serves as a focus city for GoAir, IndiGo, Jet Airways, JetLite and SpiceJet.

Notable international airlines include the following:

The airport is occasionally subject to operational restrictions due to fog from 15 November to 15 February between 03:00 and 08:30 (IST). Flight delays and diversions may occur on some mornings due to the morning fog. The airport operator has an enquiry number for travellers to check if there are weather related delays: ph: +91 80 6678-2255, +91 80 6678-2251. Alternatively, call the call centre of the airline that you are travelling with.

The airport has an international and a domestic terminal. There are ATMs and bureaux de change at the airport.

When departing from the airport, make sure to check restrictions on times for baggage check-in, and make sure to bring a printout of your boarding pass with you to the airport. For flights leaving in the early hours of the morning (such as 3AM), you may need to check in your bags as much as two-and-a-half hours in advance.

Bengaluru has two major railway terminals. The Bengaluru City (IR station code: SBC) railway station is situated in the heart of the city, opposite the Majestic Bus stand. Most trains, both local and long-distance, arrive and depart from here. The other terminal is Yeswantpur Junction (IR station code: YPR) located on NH-4 (Tumkur Road). A few (mostly long-distance) trains arrive and depart from here. Two smaller railway terminals are Bengaluru East (IR station code: BNCE) and Bengaluru Cantonment (IR station code: BNC).Of late Krishnarajapuram (KJM) has become an important stop owing to proximity of IT companies and the ring road just passing close to the station and well connected by buses to major parts. It also forms the 1st stop for majority of trains leaving Yeshvantapur towards Jolarpettai.

Bookings can be done at either the railway stations or at the Indian Railways booking counters located in major commercial and residential areas. Booking can also be done online [1]. Note that if you are booking at Bengaluru City and are traveling to Mysore, there is a separate counter for travellers to Mysore. This is to cater for the large amount of travellers between Bengaluru and Mysore. If travelling to Mysore on a Sunday afternoon, arrive early as there is usually a long line for buying tickets.

As with all Indian railway travel, have some patience for delays. Trains are usually on time (within 20min of scheduled time), but can sometimes be late. A digital departure board in the station will tell you what platform your train is on and what time it leaves.

Travelling from Mumbai to Bengaluru by train takes a long time (24h or so). Buses are comparatively faster and take 18-20h, provided there are no traffic jams in Mumbai and Pune en route. Effective travel time by both train or bus is long. Air travel is recommended for traveling between Mumbai and Bengaluru, the duration of which is about 90min. Low cost airlines charge the same fare as A/C train or Volvo bus. However, sleeper class (non air-con) train travel from Mumbai to Bengaluru is economical and you can have a view of some lush evergreen forests and river valleys across Western India.

If you have difficulty in arranging a plane or railway ticket to/from your next destination, or you prefer a little more adventure, you can go by bus. There are both government and private buses that run services to/from major cities like Mumbai, Goa, Chennai, Mangalore, Coimbatore, Madurai, Tirupati, Hyderabad, etc. Buses can be a normal luxury bus, a Volvo A/C bus or a sleeper bus for night travel.

Unlike other metros, the display boards in the bus show the destination in the local language Kannada. But the bus numbers are mostly in English. If you don't speak Kannada, you will likely need to get some help to get on the right bus. However, the newer Volvo buses are all equipped with electronic displays that display the destination and route numbers in both Kannada and English. Non-Volvo buses are being gradually retrofitted with these electronic displays; this should make bus travel much simpler if you are unfamiliar with the local language.

Driving in India can be very stressful. Lane discipline is practically non-existent, excessive honking, high vehicle density, lack of regard for traffic law, combined with razor thin passing margins are common. One ride in a taxi will most likely convince you that driving yourself is not worth the risk, so if you do want to arrive by car, you will probably want to hire both a car and a driver. Cost varies, but most car/driver combinations cost Rs. 1,400-1,700/day. The fares for hired private taxis are usually in the multiples of 4h/40 km, fares for which start at around Rs. 450 for a non-air conditioned small car. Depending on where you are coming from, you may be able to negotiate a lower fare if the trip isn't far, and it may be a higher fare if you are travelling far and your driver has to travel back on his own time. Having an approximate idea of the fare or distance beforehand and persistent bargaining skills can lead to significant savings. Although it costs more, consider requesting an air conditioned car if you aren't used to the heat, especially in summer. An air conditioned car will also help filter out the air pollution, which is considerable, especially on congested roadways. If you want something even more special, such as a fancy car or SUV, be prepared to pay extra.