How to simulate a drone using ROS (FlytSim) 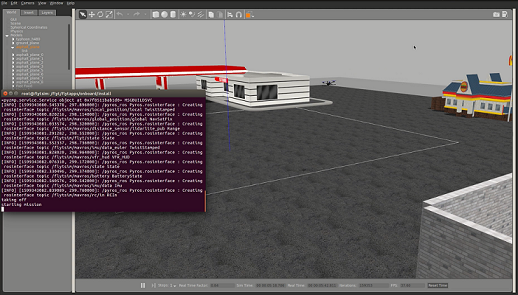 As the usage of drones is expanding day by day the misuse and accidents are also increasing because of drones. Before testing a drone in real-time simulating it on a simulator will decrease the wastage of time and money. By doing this, the occurrence of accidents due to the malfunction in hardware or software of drones can also be avoided. In this ROS tutorial, we are going to simulate a drone in FlytSim simulator which is a ROS-Gazebo based setup.

FlytSim is a 3D simulator for Drone applications. This simulator helps developers to test their applications at the convenience of their laptop/desktop. With the SITL simulation environment, the developed application can be tested without the drone hardware. During the simulation, autopilot uses the same algorithm on FC to make the behaviour close to real-time.

Looking to build projects on Drone?:

Drone Kit will be shipped to you and you can learn and build using tutorials. You can start for free today!

Step 1 - Install ROS and Gazebo in your Linux laptop. (For the installation process you can refer to the official websites)

After the installation, the system will reboot.

Step 4 - Install FlytSim from the downloaded package. (Choose the one which suits with your laptop configurations)

Run the following command to install the software (for intel graphics)

Go to the installation directory and run the following:

Install docker and docker-compose. To check whether it is installed or not, run the following command:

Want to develop practical skills on Drone? Checkout our latest projects and start learning for free

Step 5 - Start the FlytSim by running the following command:

After starting the FlytSim, activate the FlytOS by generating the key. You can refer to the official FlytBase documentation for the installation process.

Note: Without activating the critical APIs and Demoapps will not function.

drone.take_off(5.0) #This command lifts the drone up in the air for 5m.

print ' going along the setpoints'

Save the code in .py format and launch it. Now you can observe the drone take-off and cover the given waypoints.

How to simulate a drone using ROS (FlytSim)