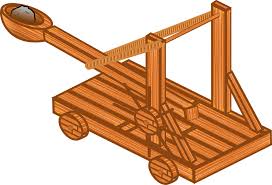 Your childhood is when you are most inquisitive and curious. Therefore, it is the time where you learn the most number of things because you ask all the right questions.

Looking to build projects on Robotics for kids?:

Robotics for kids Kit will be shipped to you and you can learn and build using tutorials. You can start for free today!

Developing a love for science and technology should happen at such an age as this will lead to an innate interest in future years. One of the best ways to promote such an interest is by having children invest their time doing projects. School projects help children explore concepts they have studied in class. This helps in making science a whole lot more interesting. In this article, we will be looking at a project which will help students learn some physics by building their own catapult!

The catapult was basically an antique weapon that worked as a ballistic machine that helped armies launch stones and lay siege on enemy fortifications. They were extremely powerful weapons in the ancient world and has helped many kings take down their enemy's forts and castles. Everything from stones to flaming balls can be launched by this machine, which meant it could make a lot of damage to forts and buildings.

In this project, we will build a miniature catapult using popsicle sticks or ice-cream sticks. This device will use the same physics and will help teach children the physics behind catapults. It is a simple, and easy-to-make project that utilizes everyday objects, and involves no added expense.

Greeks and Romans used catapults almost 2,000 years ago, and they helped several empires rule the world. Catapults were used during the 17th century by everyone, including kings and pirates, to destroy enemy fortifications. Medieval knights also employed these devices to seize castle walls and enter into enemy castles. As they were long-range instruments, it helped armies cause maximum damage without taking any damage themselves.

Latest projects on Robotics for kids

Want to develop practical skills on Robotics for kids? Checkout our latest projects and start learning for free

Kit required to develop Catapult:
Technologies you will learn by working on Catapult: