7 Reasons for a child to join a Robotics team 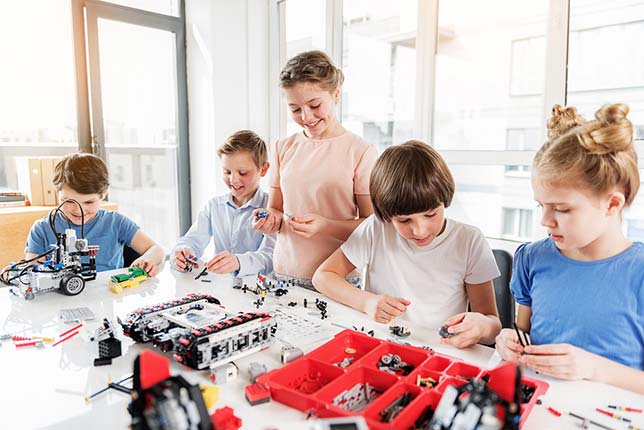 Artificial intelligence (A.I.) is the future of technologies. We all know that it is going to be there in the future and the rate at which we are getting results, that future doesn’t seem so far.

Soon enough, there are going to be robots that will not only do simple tasks but will also solve our difficult queries simultaneously.

It is wise to learn about the future that our kids are going to be a part of; hence it is not only a need but a necessity for kids to understand the importance of robotics in education and to indulge in that fun robotics club activities.

Explore more about robotics for kids

Benefits of teaching robotics for kids

The importance of robotics is far greater than any degree as it is going to be part of your kid’s future. Scientists have successfully made a robot that is ready to serve in the army. It can detect bombs, it can protect the soldiers in need, and it is going to be bulletproof which can be lethal to the enemy. They are currently working into making a hybrid; an actual android just likes in the movie “Terminator”. Robotics war won’t include any type of bloodshot and would be safe for the citizens of any country.

Apart from war, they are soon going to be mass production of robots that can make your apartment clean and help your remedial monotonous tasks of the day. Kids will not only learn the theoretical part but also would make their robot starting from making your robotic car. They will learn to code into an atmosphere of fun by those fun robotics club activities.

They are going to indulge in a robotics competition that tests their robots and their coding skills. They will learn rather new things such as aerodynamics and hydroxyl units in a fun way that is not only limited to the bookish knowledge as they have used it in practical forms while forming their robots.

It will also develop mechanical skills in them that they can understand and solve any such mechanical practical problem. They would always be a step ahead in the future while other kids would be learning from the books, they would be practically making that bookish language into an art form of a robot. the robotics club activities will be testing their problem-solving skills by giving them a tricky question while taking apart from a robot and making it work despite that, which builds creativity in kids and also enhance their problem-solving skills in general.

Latest projects on Robotics for kids

Want to develop practical skills on Robotics for kids? Checkout our latest projects and start learning for free

Robotics for kids is a new concept in many schools which makes this thing even harder to grasp for the parents. Robots are going to be the future of any developed nation and their kids are going to be a part of that. Hence they should know about the future they are going to be a part of. This club not only helps them in making that possible but also tests their logic and reasoning and their question-solving abilities. It changes their perception of how they look at a question. It changes their perspective towards life itself building confidence and a wholesome great attitude which led them to take any challenge given by life. The importance of robotics in education is much more than anyone imagines it to be, it’s also not necessary for any kid to make a career out of this. It can simply be a hobby.

It is important to understand the field of robotics because it’s a trendy topic of today but our whole future from tomorrow. Those simple mechanics knowledge you would understand from these robotics club activities will stay with you forever. Those are practical skills and could be anytime in the future where you will be surrounded by robots. It is also fun applying a practical approach to all that theoretical knowledge we get in school. It is also something that most of the adults want to do in school but unfortunately didn’t get anything similar to this club to pursue this vision. they want to apply that knowledge they are getting in the textbooks to good use but didn’t get any opportunity like that sort and here kids are going to get this amazing opportunity in the form of fun robotics club activities, which is kind of like killing two birds from a single stone.

The skills which you learn in this club will help you thoroughly but also would provide you with bonus points for being a part of this club. Robotics for kids will be a game-changer for them. They may not realize this while attending those regular classes or the seminars or at that fun robotics club activities but they sure will shortly when they are going to deal with such problems including the concepts they learn from the practical they gather from these activities. At that moment they would just be thankful for indulging in the club which they thought they were joining for free time and the sake of fun.

7 Reasons Why your child should join a Robotics team

The summary for this whole article would be to indulge young minds in the robotics club to boost up their theoretical knowledge and to use that precious knowledge to some practical work, like building your robot. The activities of this club are fun but also test your problem-solving skills and overall creativity and make you a better version of yourself as creativity changes you from inside.

Hence bottom line is to encourage young kids into learning about their future by joining a robotics club.

7 Reasons for a child to join a Robotics team